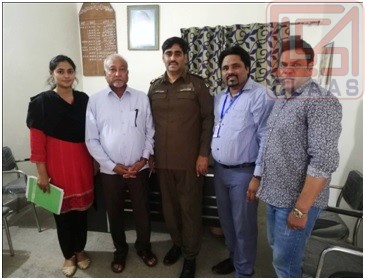 Amir Masih deceased a Christian resident of Cantt, District Lahore was killed by the police officials named Zeshan Sub-Inspector and Nasir Baig In-charge investigation of North Cantt Police Station, Lahore on September 02, 2019.  Amir Masih was arrested on August 30, 2019 by the North Cantt police officials for investigation in a theft case which was registered on the complaint one Rana Muhammad Hanief against the unknowns. The police took Amir Masih for investigation in this case and locked him up in the police station North Cantt, Lahore. During the investigation, police officials severely tortured him which caused his death. Amir’s case was highlighted on media and the local Christian community stood against this brutal police torture.  and a murder case was registered against the police officials who tortured Amir Masih but the accused were not arrested at yet. Bishop Alexander John Malik of Lahore, Church of Pakistan referred this case to CLAAS office for legal assistance to the aggrieved family of deceased Amir Masih.  On September 23rd, 2019 CLAAS visited the concerned police station North Cantt, Lahore regarding the murder case of Amir Masih.  CLAAS met with the police officials who were investigating the case.  After knowing the situation of Amir’s case CLAAS filed a private complaint on behalf of Salma Bibi wife of Amir Masih (deceased) and the private complaint is pending in the court of Mr. Fayyaz Ahmed Butter Additional Sessions Judge Lahore and Salma’s cursory evidence has recorded.

On September 24, 2019 Salma Noreen aged (27) w/o Amir Masih (deceased) visited CLAAS office and shared with the team that her husband Amir was a gardener by profession and doing his job at CMH Medical College Lahore. After finishing his work from CMH College he has been doing private job in different houses including Rana Muhammad Hanief s/o Nawab Khan at PAF colony Cantt, Lahore from the last 12 years. As usual on August 30, 2019 Amir was on his job at Rana Hanif’s house and did not came back to home till 7:00PM then she made a call to Amir on his mobile phone but he did not picked. She called him again and again but his mobile phone was remained off.  Next day on August 31, 2019 she made telephonic call to her elder brother namely Amjad Pervaiz who is living in Sheikhupura another District and she brought the entire situation into his notice. On the same day Amjad Pervaiz along with other relatives namely Munir Masih (cousin) and Tariq Masih reached at Salma’s house in Lahore and called on No.15 (Police Help Line) and asked for help but police did not respond them.  After that Salma and her brothers reached at Rana Hanif’s house and asked about Amir. Rana Hanif’s security guard told them that on August 30, 2019 at about 4:00PM, Amir was called by the police official namely Zeeshan Sub Inspector who called him at police station North Cantt District Lahore for investigation in a theft case which was registered by Rana Hanif with the allegation that his money Rs. 12 lac (Twelve Lac PKR) was stolen from his house and after the registration of FIR police is investigating the matter.

After hearing about the police station, Salma along with Amjad Pervaiz, Munir Masih and Tariq Masih immediately reached at North Cantt police station, Lahore and met with two police officials namely Qayum and Nasir Baig In-charge investigation. They requested them for meeting with Amir but police did not allow them to meet with him and started making lame excuses. Salma and Amjad also inquired to the police regarding registration any FIR or application against Amir Masih the answer was in negative. At that time they came back to home without meeting with Amir.

Statement of Amjad Pervaiz who had met with Amir Masih while he was in the police detention:

As Amir’s family did not know about the real incident and they were scared about Amir therefore on September 02, 2019 again Amjad Pervaiz and Tariq Masih went to the police station North Cantt Lahore at about 10:00AM and stayed there till evening. They were sitting outside and at about 4:00PM police official Qayum called them inside the police station where Amir Masih was confined. According to Amjad Pervaiz the physical condition of Amir Masih was very critical. He was badly tortured by the police officials. He has sustained severe injuries on his body. Amjad inquired to Amir and he disclosed that on August 30, 2019 Rana Muhammad Hanif s/o Nawab handed over him to the police station North Cantt Lahore on the suspicion of theft.  Amir tried to prove his innocence but police kept him in a private torture cell. Amir Masih further told that Nasir Baig Incharge investigation, Zeeshan Sub Inspector, Ali, Anser and two unknown police officials brutally tortured on him with iron pipe and gave electric shock, just on asking of Rana Muhammad Hanif. While Amir was sharing about his suffering with Amjad, in the mean while his physical condition became serious. Amjad immediately called at 1122 for Emergency Medical Technician (EMT), who came on Motor Bike in front of police station North Cantt Lahore and gave First Aide to Amir Masih.  Amjad along with other relatives took him to Services Hospital Lahore in Emergency Department for his medical treatment where at about 9:00PM Amir was died due to severe beatings by the police officials.

Amjad Masih further shared that during the police custody police took Amir Masih to a private Hospital but the hospital management refused to give medical treatment to Amir Masih due to police case. The footages were viral on social media. Amjad Pervaiz along with his relatives many times approached to the police and tried to give actual facts but the police just to save their colleagues did not do the needful. 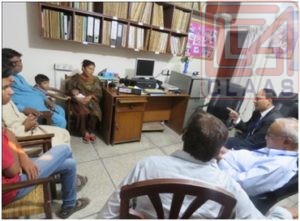 Salam shared that after the death of Amir Masih the miseries of Salma were not ended and she has to leave her husband’s house and shifted to her brother’s house at Sheikhupura.  She further shared that she has spent seven years with her husband and they are blessed with two children namely Arvin 06 years and Aron is only one month old.  Salma was a housewife and she never thought to live alone without her husband. But after his death the circumstance are changed and now she is living with her brother at Sheikhupura. Her brothers are looking after her and her children. She further shared that after the death of Amir a local Minister promised her for financial help for her survival with her minors but she was not compensate at yet with any support. However she is just praying for justice and therefore she wants to pursue her husband case.

CLAAS legal Assistance and update of the case:

On September 24, 2019 Salma along with her brother Amjad Pervaiz and Shahid Perviaz approached CLAAS office for legal help and shared the facts mentioned above.

CLAAS appointed its legal advisor Mr. Tahir Bashir Advocate for court proceedings and on October 03, 2019 a Private Complaint has filed by CLAAS lawyer on behalf of Salma Bibi in the court of Mr. Shehbaz Hassan Judicial Magistrate Cantt Courts Lahore. The Magistrate referred the complaint to the court of Sessions Judge Lahore for October 05, 2019 which will be duly entrusted on October 09, 2019 to the court of Mr. Fayyaz Ahmed Butter Additional Sessions Judge Lahore and later on fixed for October 10, 2019.

On October 21, 2019 case was fixed for statement of Salma Bibi in private complaint. CLAAS lawyer Mr. Tahir Bashir was present along with Salma Bibi in the court of Mr. Fayyaz Ahmed Butter ASJ Lahore. Before recording the statement it was transpired that Salma Bibi due to trauma of sudden death of her husband was not properly ready to give her statement, hence a request has been made to the court for short adjournment.  The court adjourned the case for November 06, 2019 for the same and later on case fixed for November 16, 2019 and on the said date Salma’s statement was recorded.

On the other hands the culprits who are police officials are not arrested at yet and got bails from the court in murder case of Amir. The trial of this case is pending.