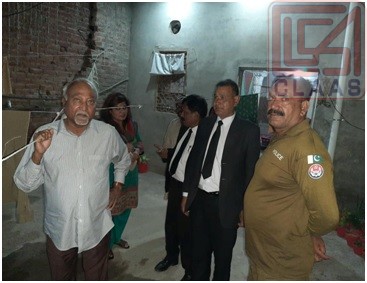 On 23rd October 2019 Mr. Joseph Francis National Director with CLAAS team Mr. Sohail Habel, Miss Shama John CLAAS lawyers Mr. Nasir Anjum Mr. Akther Sindhu went to village Badiana district Sialkot to find the actual reason of fire in Stephen’s house. This incident took place on 18th October 2019 and again on 22nd October 2019. Mr. Joseph Francis firstly visited the police station and met with the ASI of police station Badiana Mohammad Amin and inquired him about the facts and not lodged any FIR of this occurrence yet. M. Amin ASI said that the burning of house is not the act of terrorist attack it is caused by short circuit, so we did not register any FIR, he further informed that brother of Stephen Masih named Francis called on 15 and 1122 for the rescue operation in his home, 15 urgently informed to the concerned police station for the appropriate action, police reached there with rescue team of 1122 to extinguish the fire and according to their initial report they said that the reason of the fire is short circuit (they didn’t provide us the copy of 15 and 1122 initial report). Mr. Joseph Francis insisted the police officer to register the FIR but they were reluctant to register the FIR for some unknown reasons. 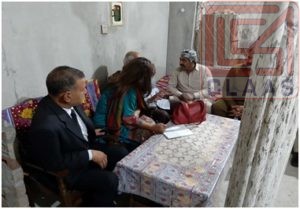 Although they received an application from the victim Francis Masih but they didn’t take any action and said that the cause of fire is short circuit so they didn’t  lodge any complain or FIR.  Here It is pertinent to mention here that the application was not very much cleared and without proper facts, Francis Masih did not give any reference of previous case of Stephen Masih who is accused of blasphemy (CLAAS is providing him legal aid in this case). Then CLAAS team asked ASI to provide security so we can visit the place of occurrence, they provided us two police men equipped with guns.

When we reached at the place the house was locked and Francis Masih who was calling us since morning to visit the place did not come to show us the house. He said he is not feeling well so he cannot come to visit us. Francis’s cousin Allah Rakha who informed Francis about the fire even did not come to meet the CLAAS team. 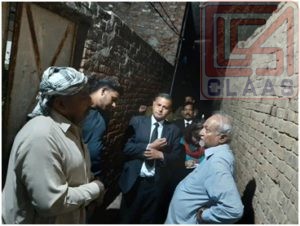 We talked with the neighbour named Kaleem Masih and Taimor Masih they said that they are living in this village since 1982 and Stephen’s family also living there since that time, and there are 60 to 70 houses of Christian and Muslims in this village and they are all living very peacefully, further they said that house caught fire due to short circuit and no one burnt the house.

The house is situated in a narrow street and surrounded by high walls, they added the house caught fire in the morning around 10:30 AM and Aliya bibi Stephen,s sister came to visit the house at 11:00 PM in the night due to security reasons and his son made the video of the house, but according to neighbors there is no danger to the particular family. Kaleem Masih further said that when house caught fire due to short circuit his wife took the water pipe and extent the fire.

As the door was locked so the CLAAS team members Mr. Sohail Habel and lawyer Mr. Nasir Anjum put a ladder and jumped into the house with the help of habitant of the vicinity and two police officials. CLAAS team members also took pictures of the burnt house and they said, there are two rooms and a room which is full with domestic belongings is saved and other room which is like a kitchen burnt, in which there are some woods and other old things were laying. Francis, s neighbor Kaleem Masih said that Francis didn’t use to come to this house because he is living at some other place they further said that Francis, s cousin Allah Rakha is not honest with Francis and want to grab this property by frightening him that this place is not safe for him. But all Christian and Muslims are living there peacefully. Another woman Nasira Bibi w/o Sarwar Masih from neighborhood informed CLAAS that house caught fire due to short circuit.

But Shamim Masih who is Francis and Stephen’s cousin is still insisting that someone burnt the house and it is not due to short circuit, whereas Shamim Masih doesn’t live in same village. 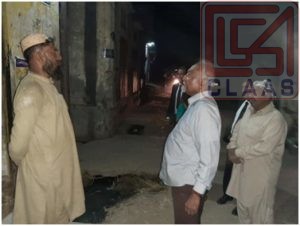 Furthermore Mr. Joseph Francis is still demanding to Badiana police to lodge FIR about the incident whether it is due to short circuit or some unidentified reason and he also uttered that this is the negligence of WPDA not to retain the electric cables appropriately which caused the short circuit and spread fear in the town.

Since the case is registered CLAAS has taken the responsibility to provide legal assistant to blasphemy victim and regularly appearing in the trial at additional session judge pasrur. It is the duty of CLAAS to provide legal help to Stephen Masih by all means but on the other hand CLAAS is also responsible to bring actual and true facts on record, the information of short circuit collected by CLAAS team is one of the examples. Moreover CLAAS also negate all fake news regarding burning the house of Stephen Masih due to attacked by extremists and requested to so- called human rights organizations not to spread the false news in the community, who is already suffering with many problems.