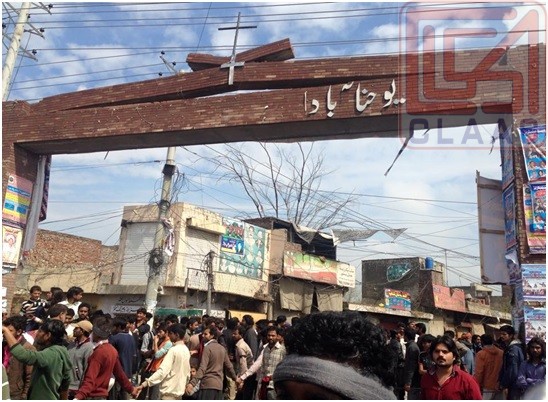 On March 15th 2015 four suicide bombers attacked two churches in Youhannabad (Catholic and Christ Church) killed several Christians and injured hundreds. Christian community protested against the brutal attack in Youhanabad Churches. After blast few Christian were helping the rescue teams in collecting dead bodies and taking injured to the hospitals, other Christian resident of Youhanabad took their anger on the street and protested against these brutal attacks. During the demonstration people suspected two men; who few recognized were the attacker’s accomplice among the protesting crowd.  According to the eye witnesses the angry protesters grabbed these two suspected men and recovered a fire arm from one, they handed the suspected attackers to the on duty police officers.  The witnesses claim that the two attackers were handed to the Muslim crowd that was gathered on the main Ferozepure Road Lahore. These men were burnt alive by the Muslim extremist who was present in the crowd at that time. The news agencies started playing the news accusing Christian protesters of burning the two Muslims. After this incident Muslim fanatics became violent and declared both terrorists namely Hafiz Muhammad Naeem and Baber Numan as martyrs. 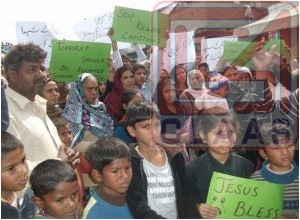 On the instructions of Punjab Chief Minister three separate FIRs (First Information Report) were registered against unknown Christians meaning that police has the authority to nominate and charge as many Christians as they want. FIR 391/15 & 393/15 was registered for Lynching, FIR 392/15 and FIR 395/15 for vandalism and destruction of government property. These cases were registered in Nishtar Colony Police station, Lahore. After getting free hand from the government police started raiding every Christian house in and around that vicinity. Police broke into Christian home late night using ladders. Every male from the house was abducted and was taken to unknown destination. The female and children were threatened and forbade to speak about the police action. Some of them have fled from Youhanabad abandoning their homes after continuous harassment from the government, police and law enforcing agencies. After eleven days of disappearances an old man (Late Baba Javed) whose six sons were abducted approached CLAAS and narrated the story and asked for help.  Later on so many other family members also approached CLAAS office and requested for legal assistance for the recovery of their male family members. 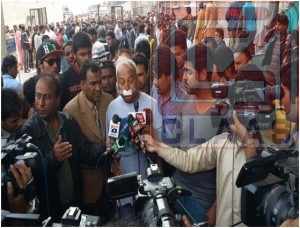 CLAAS immediately filed a petition in the Lahore High Court against Chief Minister Punjab, Interior Minister Rana Sana Ullah and other high officials in Punjab government for disappearances of Youhanabad residents. In the first hearing the honourable judge gave orders to the Punjab government to present the disappeared individuals in the Court. Right after this police released the 08 abductees threatening them not to speak against the law enforcing agencies in the court hearing.

Out of these remaining detainees 42 were nominated in the lynching case of Youhanabad FIR No. 391/15, 393/15, Offence under section 302/324, 353/297, 201/148,149/290, 291/186 PPC, 7ATA, registered at police station Nishtar Colony, Lahore on March 15, 2015 and after judicial remand were sent to Kot Lakhpat jail, Lahore.  While in prison these victims continue to face discrimination and harassment from other fellow inmates and prison officials. During one of the trial court hearing some of the accused told Mr. Joseph Francis that the State prosecutor was threatening and forcing them to embrace Islam and they will be rewarded with 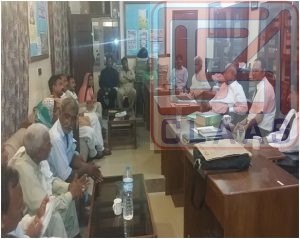 acquittal in case of refusal to this offer they will face severe consequences and their families will also not be spared. Hearing this CLAAS arranged a press conference to disclose the facts to the media. The electronic and printed media highlighted these allegations and gave full coverage to this incident. The Punjab government was forced to probe into this matter and confirmed the allegations charged against the State Prosecutor, he was immediately suspended and transferred to another city. Right after this incident two of the detainees have died and one was taken to the hospital after cardiac arrest. The jail authorities conducted autopsy of the two deceased claiming the cause of death natural. CLAAS gave an application in the Lahore High Court requesting to have full medical examination of all detainees, our application was accepted and alleged victims got their medical examination.

Initially CLAAS provided free legal assistance all 42 prisoners of lynching case but subsequently some other organizations also involved and submitted power of attorney by different lawyers who did not pursue the case properly.  On behalf of 11 victims CLAAS moved their post-arrest bail in the court of Mr. Sajjad Ahmed Judge Anti-Terrorism Court Lahore on June 26, 2018 in which arguments heard and the bail petition were dismissed. 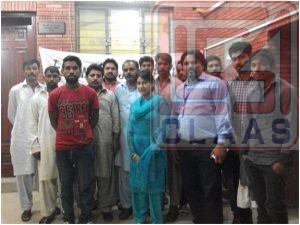 Two separate cases (FIR 392/15 and FIR 395/15) were registered for vandalism and destruction of public property and all together 49 young Christian men were arrested in these cases, all of whom are on bail. Some of them were arrested from their homes; some were picked up from the road while they were returning home from work. They were all taken to unknown places and were kept in illegal detention for several days where they were subjected to physical torture. Some of them were so badly physically tortured in the police station that they were unable to walk for months. They were released after CLAAS filed a petition against the Punjab government for their bail was confirmed by the Lahore High Court in July 2015 after which the Government of Punjab through its prosecutor general moved a petition in the Supreme Court of Pakistan for cancellation of their bails. CLAAS contested this application in the Supreme Court; the Court decided the case on merit and confirmed the bail of all these victims on October 22, 2015.

There are three trials (one trial in lynching case and two trials in vandalism case) regarding Youhanabad twin Churches Blast are under proceedings since 2015 and pending before the court of Mr. Sajjad Ahmed Judge Anti-Terrorism Court Lahore. In all three trials 91 accused were booked by the police. Three died while were facing trial and the remaining 88(presently 40 accused in lynching case are confined in Kot Lakhpat Jail Lahore and 48 in vandalism case is on bail) are facing trial in Anti- Terrorism court Lahore. 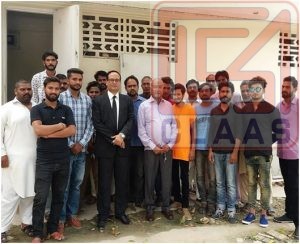 On August 26th, 2019 in FIR No. 395/15 titled as State vs Samson etc was fixed before Anti-Terrorism Court Lahore and CLAAS legal adviser Mr. Tahir Bashir Advocate was present in the court on behalf of seven accused.  The remaining accused of this case were also present but their lawyer was absent. Since the trails of three Youhanabad cases are commenced CLAAS lawyer is appearing regularly in every date of hearing in the Anti-Terrorism Court Lahore. While sharing with Mr. Tahir Bashir Advocate, 14 accused disclosed that their lawyer is not appearing from last more than one year and now they are feeling helpless. The said accused further put their confidence upon work of CLAAS, requested for pursuing their case and 14 accused signed power of attorney of CLAAS lawyer which was submitted in the court on the same date. Now CLAAS is representing all accused (21 who are nominated in vandalism FIR 395/15) and is pursuing the case in trial court as the case was delayed due to non-availability of other lawyers who are pursuing the case. So, at present out of 88 accused CLAAS is providing legal assistance to 45 accused (39 in vandalism and 06 in lynching case) in trial court. CLAAS lawyer has completed cross examination on prosecution witnesses and has also advanced arguments in above said trials.

On October 21, 2019 vandalism case trials of Youhanabad was fixed for court hearing (FIR No.395/15 and 392/15) and all 48 accused were present in the court. As CLAAS is defending 39 accused therefore the final arguments have been completed by Mr. Tahir Bashir Advocate legal advisor CLAAS. Both trials were pending for orders for October 24, 2019 and then adjourned for October 28, 2019 and due to non-appearance of other lawyers’ argument case is still pending for decision. 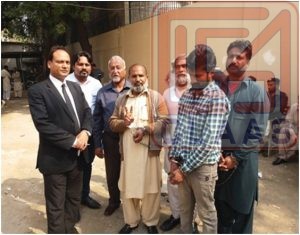 The trial of lynching case is under day to day hearing and hopefully all these cases would be decided soon. In this month on October 18, 2019 the lynching case of Youhanabad was fixed for hearing for petitioner (Muhammad Saleem) and prosecution’s argument but the arguments not heard due to non-appearance of Muhammad Saleem and case is adjourned for October 21, 2019 for the same.  On October 21, 2019 the case was adjourned due to non-appearance of the complainant Muhammad Saleem and next date is October 22, 2019.  On October 22, 2019 arguments have been completed on behalf of accused from defense side. Case was pending for arguments from complainant side but he did not appear before the court and case adjourned for October 23, 2019.

The complainant has moved an application to play video footage of the incident inside the court. The application was fixed for arguments and on October 23, 2019 CLAAS lawyer while oppose the application and argued that court is not the part of investigation agency hence the said video cannot be played by the court. Further at the time of hearing it was transpired to the CLAAS lawyer by the court that a defense counsel namely Mian Pervaiz Akhtar Advocate engaged by some other co-accused offered to the complainant for compromise with the consideration of compensation in shape of money. Having knowledge this serious fact CLAAS lawyer vehemently opposed and urged to the court that he seek decision of the case on merits as the accused to whom CLAAS is providing legal assistance are completely innocent and they have nothing to do with the alleged offence.  The court fixed the case for October 24, 2019 for further arguments of other defense counsels but on October 24th 2019 the case adjourned for October 28th 2019. Presently the trial is pending for the arguments from complainant side.

Victims and their families’ suffering: 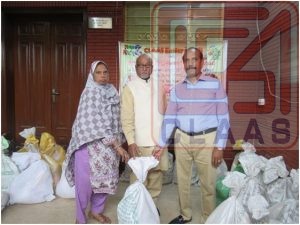 Majority of the Christians nominated in these cases were not even home at the time of this incident. They are all poor labors working odd jobs on daily wages, after this case no one employs them in and around Youhanabad, therefore they travel far from their homes to find work. Every time they have court hearing they had to miss work. Even though they are on bail they are unable to do any work or labour. Still they are jobless as court is hearing the cases of Youhanabad day to day and the accused/ victims are attending court hearing on daily basis. They are under financial crises and requested CLAAS for financial support. It is not just the alleged victims who are suffering but their entire family is going through trauma. One of the victims minor daughter told us that she never sleep without praying for her father because she was afraid that the night she forget to pray her father might not return home. Despite our limited resources CLAAS provided monthly grocery and some financial help to more than 30 accused/families of Youhanabad incident.  Still 10 families are receiving grocery on monthly basis and recently in June 2019 more than 17 victim families of Youhanabad financially supported by CLAAS.

We would like to request you all please keep the victims, CLAAS lawyer and the concerned Judge in your prayers for justice.