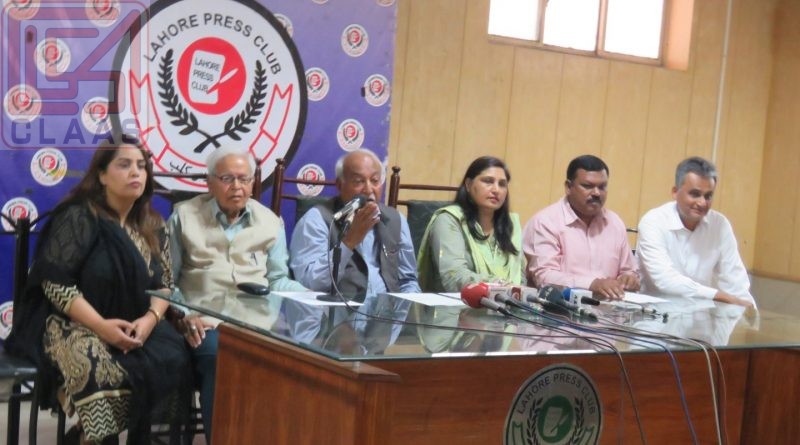 Today in a press conference Mr. Joseph Francis (MBE) National Director of Centre for Legal Aid Assistance and Settlement (CLAAS) being the member of Christian community along with members of Human Rights Commission of Pakistan expressed his deep sorrow on the alarming situation of forced conversion of the minorities’ girls in Pakistan. Mr. Joseph Francis stated that “our young minor Christian and Hindu girls are forcefully converted into Islam and forced to marriage with the Muslim men under the Islamic rites. There is no law against conversion in Pakistan whereas number of conversion cases is increasing day by day. The courts always showed their biased attitude if a minor Hindu and Christian girl contract marriage under the Sharia Law and always kept aside the child marriage restrain act where the age of a girl for marriage is determine as 16.

Mr. Joseph Francis highlighted the recent case of two real sisters from Hindu community Reena and Rveena who have been forcefully converted by an Islamic cleric of a village at Ghotki of Sindh Province. Subsequently their marriage was solemnized with two Muslim men who were already married. Interestingly these two Hindu girls are under the age of 16 and according to law cannot be converted or contract marriage. Similarly recently another case has been reported in District Faisalabad where a Christian minor girl has been forcibly converted and then married to a Muslim man. In Bahawalpur a Christian girl Sadaf aged 13 was also forcefully converted into Islam and then forced for marriage with his Muslim abductor. Mr. Francis shared his concern that religious minorities in Pakistan are very less in numbers whereas the Muslim majority always dominate and in such like cases the minority’s person always feel scared by the majority. Moreover CLAAS has done number of cases in which the underage girls were abducted and forced to marriage accordingly to Islamic rites. There are also so many examples where the married minorities’ women were forcibly converted and then forced to marriage with their  abductors and their families  while belonging to minority suffered as well. Unfortunately police also favor to the majority people.

Mr. Joseph draws indulgence of the participants of press conference on this serious issue that due to force conversion hundreds of Hindu families are constrained to leave their homeland which has badly destroyed the image of Pakistan internationally. The past governments and the present government failed to handle this sensitive issue and because of that a sense of insecurity has been created in the mind of the religious minorities in Pakistan. It is worth mentioning that Islam has settled the remarkable principals on human rights and talked about the rights of minorities but unfortunately the actual sprit of Islam is missing here.

Through this press conference we demand for the constitution of

Thank you very much,