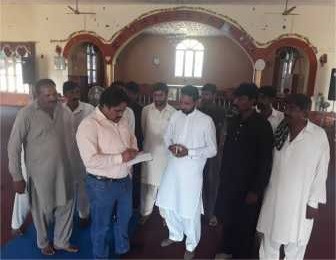 Christian villagers have been facing threats of a possible attack from local Muslims as tensions amplified between them. Details emerged that Christians in villages number 36, 37 and 38 located in Division Quaid Abad of District Khushab are imperiled as they anticipate retaliatory action from Muslims. It is believed that the clashes were activated after a local Christian boy Sunil Masih (24) eloped with a Muslim girl Shazia Parveen (16). Soon after the news of the incident spread, local Muslims started demanding the return of Shazia. Christian villagers are being threatened and pressurized by the Muslim majority to call the eloped couple back. Now the Christians are calling upon the authorities to provide them protection so that they are not harmed.

After knowing this incident on September 07, 2017 CLAAS team comprising of Mr. Sohail Habel and Mr. Asif Raza immediately rushed towards the conflicted area to gather facts. The team was facilitated by Mr. Javed Bhatti District coordinator of Pakistan Christian National Party Khushab, and Pastor Wikson John, Church of Pakistan. The team also met with the local residents and visited the concerned police station and collected the FIR (First Information Report). 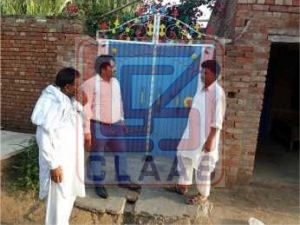 According to the facts, Maria and Jacob Masih alias Vicky are the parents of Sunil who came from Faisalabad and settled in the village of Khushab some 10-15 years ago. Jacob is a drug addict and does not work. Maria is a Lady Health Visitor (LHV) nurse and runs a private clinic at home. She is the sole earner of the house and often visits people in the remote areas near her village to provide medical health care. As time moved  on  she  continued  her  work and developed good relations with people in the nearby villages. Mohammad Suleman (Shazia’s father) developed close relations with Maria and despite living in separate villages they started paying visits to each others’ homes just like relatives. On September 2, 2017 Maria along with her family went to Mohammad Suleman’s house to attend his niece’s wedding. Since they came from another village, Maria had to stay night at Mohammad Suleman’s house with her family. Next morning i.e. September 03, 2017 when everyone woke up to get ready for the function, Mohammad Suleman found out that Maria and her family along with his daughter Shazia were not present at home. 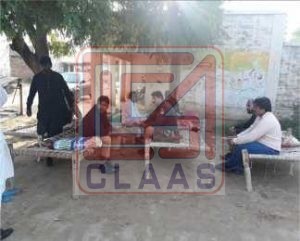 They started searching them and went out in the neighborhood to look for them and did not find them. As they were searching them in the nearby villages and during the  investigation by the Muslims the Christian of above said villages were scared for  dire consequences and the news was spread like a wild fire. But later on September 06, 2017 Mohammad Suleman went to the local police station Quaid Abad to register a complaint for his missing daughter. The police registered an FIR No. 336/17, under the offence 365-B (Kidnapping, abducting or inducing woman to compel her marriage) of the Pakistan Penal Code against Sunil Masih. The complainant also mentioned two eye witnesses in the FIR namely Syed Rasool and Mohammad Hussain who told them that they saw Maria and her family with Shazia getting into a white car and took her away. After registration of the FIR the local police raided Maria’s house but she along with her family has fled from the scene. The District Police Officer’s PSO (police support officer) Inspector Imtiaz has deployed heavy contingents and elite force in front of Maria’s house.

The team found that the local Christians are not in danger anymore as the police have controlled the situation and assured that they will curb any unfavorable circumstances as told by the on-duty police officials. At present the girl Shazia recorded her statement in favor of Sunil under section 164 Cr.pc before the Magistrate Court in which she stated that she was not abducted by anyone and got married under the Islamic rights with her free will.