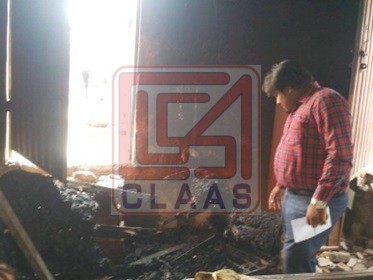 On April 4, 2017, Ameen Masih 45 was locked in his house and burn to death by two shop owners and their accomplices for not paying the installments of the goods he got from the shop in Uggoki, Sialkot.

CLAAS team reached at the place of incident for condolence with Ameen’s family and collected facts from the local residents.  According to the local resident who was an eye witness of the brutal incident Mr. Khalid Yousaf, Ameen bought electronic compliances from Afzal Electronics and Shehran Electronics worth Rs. 350,000 and sold them out to pay off his deficit.  He was a hosiery worker with a limited salary therefore unable to pay the monthly installment of Rs. 18,000/- on time.

At 10:15 a.m. on April 3, 2017 Muhammad Usman, Asim Ali, Yasir Bajwa and Shehran came to Ameen’s house, beaten him with sticks and cricket bats and dragged him out while threatening to kill him if he will not pay the remaining amount.  The whole day Ameen was unable to trace by the family but later that night shopkeepers returned and confined him at his resident and set the room on fire and locked it. They stayed outside the room and not allowed any of the family member or local resident to unlock the room to safe Ameen’s life.

Later, helpless family dialed police helpline number for help meanwhile mean while the perpetrators managed their escape with the burning room keys.  The local residents and relatives broke the wall of the room engulfed with heavy smoke and found Ameen dead and furniture burning in blaze.

The police shifted the dead body to the Government Allama Iqbal Memorial Teaching Hospital Sialkot for autopsy.  His funeral was held later in the evening and he was laid to rest on the same day on April 4, 2017. 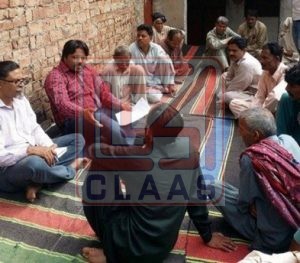 CLAAS team saw the actual room where Ameen breathed the last due to fire set by the culprits.  The team visited the Uggoki Police Station and met the Investigation Officer Mr. Razzak, who was cooperating with the family and requested to carry a fair investigation in the murder case of Ameen. The team collected the copy of FIR report from the Police Station.

A complaint of the incident was registered at Uggoki Police Station on the complain of Ameen’s wife Rakhil Bibi 40 and an FIR No. 143/17 offence under section 147, 149 and 302 Pakistan Panel Code.  At present, Police has arrested Asim Ali, Yasir is on pre-arrest bail and Usman and Shehran have managed their escape.  Shehran’s family pledged to present him to Police in a day or so, according to the Investigation Officer. 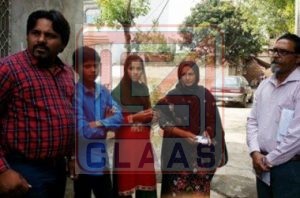 The team expressed condolence and offered legal assistance to Rakhil Bibi complainant of the FIR.  However, she works at Forward Gear Factory and has to raise three children, son Suleman 14, grade 9, daughter Michel 12, grade 7 and son Unas 9, grade 2 all by herself after the death of her husband Ameen.

Rakhil Bibi was in a great shock on the tragic loss of her husband and said that it would be difficult for her to manage the house and education of her three children.  The children were traumatized on the loss of their father.  She said that her children were silent after witnessing the brutal dead of their father and in a state of mourn.

The team visited Afzal Electronics to meet Yasir, however he was not present at the shop and his salesmen were not allowed to speak on this incident.  The other shop Shehran Electronic was found closed after the incident.