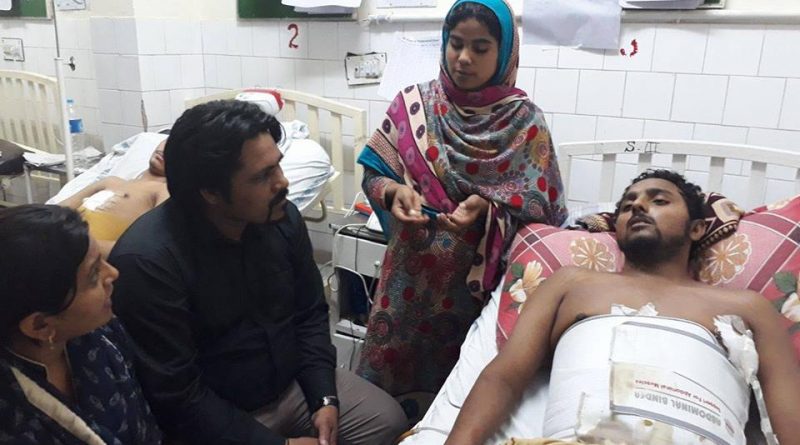 Zeshan has opened fire on his sister in-law Samina and her sons Khuram 20, Haroon 16, Moon 15 and Saghar 11 years old on March 08, 2017 in Lahore. After firing he escaped away from the place of occurrence. Samina and her sons were severely injured and taken to General Hospital by Samina’s brother in-laws Yousaf and Naveed. Where her son Haroon could not survive with his injuries and he died. Her elder son Khuram and Moon are still under medical treatment. Khuram has got injuries on his back and chest and after 10 days of medical treatment he becomes conscious. Due to sudden attack he cannot record his statement to police. Moon is in ICU and his condition is very critical. Samina was shot on right elbow and Saghar’s right hand is injured. On March 21st 2017 CLAAS team visited the distressed family at General Hospital when Samina approached CLAAS office for legal assistance and shared two days before the incident Zeshan blamed that Samina’s son Moon and his cousin Sulman Akmal 16 year old committed sodomy with Zeshan’s son Yashwa 05 years old. Though family suggested Zeshan for medical examine of Yashwa if he has any doubt. But Zeshan asked to shave the heads of the alleged boys as punishment. The family agreed to shave the heads of two boys to settle the dispute. Samina’ husband Marqas died seven years ago and she was living along with her in-laws in a joint family system at Asif Town, Lahore along with her five sons and one daughter. Her sister in-law Sobia and her husband Zeshan alias Shani is a rickshaw driver by profession was also living in the same house on upper building. Sobia and Zeshan have one son named Yashwa. The all family members were living in friendly environment but the situation was changed when Zeshan forcefully intruded in Samina’s room where she was sleeping with her sons and open fire on them. 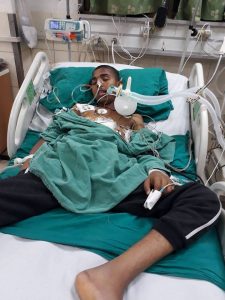 Khuram’s who is injured, his wife Ayesha shared with the team that they has four years old daughter named Aman and on the day of incident Ayesha along with her daughter went to her parents’ home. She further shared that her husband Khuram is a barber by profession but he is employee in corporation. At the moment Khuram’s condition is critical and he cannot flesh back the incident and family is not giving any stress to him. Team also visited Police Station Nishtar Colony, Lahore and met with Assistant Sub Inspector Mr. Shafqat Investigation Officer who shared with the team that a case FIR (First Information Report) 341/17 was registered on March 09th 2017 against the accused Zeshan on the complain of Samina widow, under the murder offence 302/324 of the Pakistan Panel Code. Police arrested Zeshan and confined him in police lockup for interrogation and got his remand. During police investigation Zeshan confessed his crime. Police has recovered crime weapon (one pistol) which is in police custody. Zeshan has purchased the pistol from Sharfat a Christian boy who is also arrested and is confined in police station. Police also got medical examine report of injured persons and after completion of Challan file police will sent Zeshan in Jail. Police also registered another FIR against Zeshan for recovery of illegal weapons. Team met with Zeshan in police lockup and in his statement he shared with CLAAS team that due to his hot temper he committed a murder and injured his family members but now he is guilty for his act. He requested that he wanted to see his wife and son Yashwa before going to jail