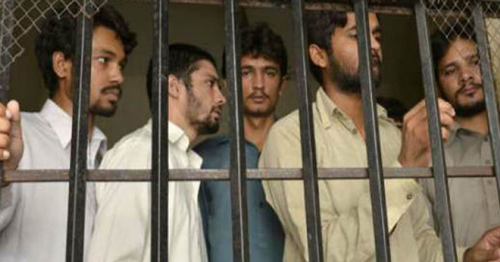 But no Christian is involved as victims or accused persons

The team visited the local Police Station of Ganda Singh Wala, where Muhammad Amin informed that there are about 21 FIRs launched till today and few more FIRs are accepted. The Government of Punjab has appointed Joint Investigation Team (JIT) in this matter.  According to police 18 accused have been arrested and looking more in due course of time. Eight accused from one family arrested; among them are sons, father and uncles. None of the Christian from non-Muslim is involved in this incident as accused and victim confirmed by Police.

Hussain Khan Wala Hithar a remote village in District Kasur of Punjab, flashed on International media due to its pedophile gang and their alleged sexual abuse of over 200 children-mostly boys. Shockingly enough these children were not only sexually abused but also drugged for submission and made videos to blackmail them and for money. Victims stole jewelry, money and other valuables from their houses to pay the gang to stop publicizing their abuse video.  Reported victims are from the age of six to age 16.

However most of the child abuse cases are not taken seriously by the law enforcement agencies, especially in the remote areas like District Kasur. Ironically, in Pakistan, a large number of child abuse cases are swept under the carpet. Usually victims are ‘advised’ to be silent being pressurized from all quarters to hush up.  Police are usually unresponsive to the impact of child sexual abuse, and many medical professionals do not grasp the seriousness of crime and often support the dominant notion of family dignity.

The incident clearly uncovered the inappropriateness of the police response from 2006 when it all started and even reported to police from time to time.  Police readily blames parents who never supervised and guided their children, never realizing where their children spend free time.  Parents failed to ask children where were they and failed to attended them many a time.

Child abuse is a taboo in Pakistan whereby victims and their families are not supported by the society but insulted and mortified.  In this case victims remained silent for years as they felt deep shame.  The victims’ families feared the consequences of reporting and felt that they have nowhere to turn or nobody to talk to.  This attitude stanches from cultural concepts of shame and family honour. Although very less reported and action the child abuse in Pakistan often take place in all circles of life: families, schools, madrassa or workplaces etc.

The team met a local Pastor Saleem Ghauri of ‘Christian Evangelical Church’ who confirmed that no Christian child is reported in the said assault.  The Pastor said culprits mostly targeted children of wealthy families in order to wring money and valuables, whereas Christians are not well to do community of the region but just serves as farmers to the landlords.

The local people also said that there are chances that girls are also victimized among many boys but the Police assured no girl child case has been reported or registered in the assault.  Perhaps parents of girls are feared of the possible insult and their girls’ future.

There are no cultural or social mechanisms to check this infamous practice. On the contrary, it is publicly noticeable, unlike sexual abuse of boys or girls, which is hidden and outwardly condemned.