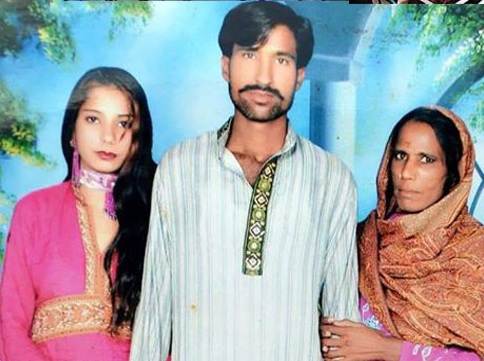 CLAAS was informed by telephonic call about the killing of Christian couple attacked by Muslim extremists and burnt alive in the brick kiln on November 04, 2014 at Chak 59 near Kot Radha Kishan Brick Kiln a Christian village about 25 km from the city of Raiwind Lahore.

The second team consist on CLAAS staff Mr. Sohail Habel (Finance Manager), Ms. Rama Rasheed (Assistant Program Officer) and Mr. Asif Raza (Field Officer) approach the area and visited the police station and met with the members of grieved family for condolence and to ensure them to provide legal assistance and moral support to the family and children of deceased couple.

Visit to the police station: 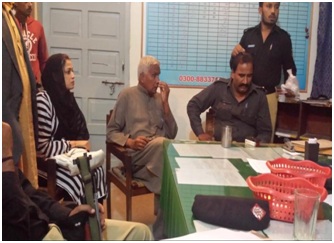 Team reached Kot Radha Kishan police station and met with SHO (Station House Officer) Mr. Shamsher informed the team about the arrest of 46 culprits and said the case is under investigation. District Police Officer (DPO) is handling the case and First Information report of murder and killing of innocent Christian couple was still awaited. The SHO further said that it is very painful, horrific incident. There are few elements who instigate the mob and used them for their own interest. He assures the fair investigation and full protection to the children and other family members of couple and Justice should be provided to this grieved family. 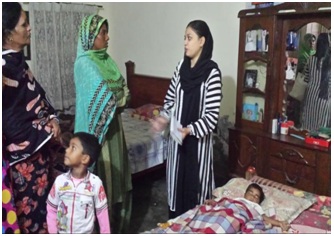 and Rani aged 1 ½ years old. The family informed that about 7 years ago the couple was married and lived happily with their three children. They also said at the time of killing Shama was pregnant of four months. Shahzad used to live in brick kiln before his marriage as he do labor along with his brothers. 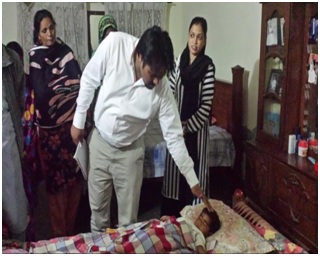 the village of Clarkabad. This mob was gathered on the pretext that a Christian couple Shahzad and his wife Shama belonging to the said village and working as brick kiln workers had allegedly desecrated the pages of Holy Quran by burning them in the brick kiln furnace. Shahzad’s father who used to do the super naturals and not only Christians but a number of Muslims come to him for prayers. A few days ago he died and Shama who does not believe on her preaching and doing supernatural’s collected all her father-in-law belongings and burnt them altogether. The same time Shahzad had some trivial matter with the contractor of the brick kiln about his advanced payment.

CLAAS team also came to know that the contractor of the brick kiln accused Shahzad of blasphemy and he spread the news in the village and nearby villages. When the mass came to know about blasphemy they made announcements in the villages to kill Shahzad and Shama. Someone informed Shahzad and suggested him to escape for his safety but he was caught by the brick kiln owner because they took advance payment of 400,000 rupees for their work and brick kiln owner did not allow Shahzad to go for his safety. But he assured Shahzad that he will take care of him and to provide security. He locked Shahzad and Shama in the room of contractor for a night because he do not want to free them as he wanted his money.

The next morning the mob came over there and Shahzad and Shama, were pulled out of the room where they were locked. Someone from the family of the victims called the Police through emergency number, on which 4 policemen from the local Police Station arrived and tried to pull away Shahzad and Shama from the clutches of the crowd. Their efforts went in-vain as they were overwhelmed by the mob which snatched away the victims.

After that, the mob gathered around the brick kiln where Shahzad and Shama use to work and where the alleged desecration took place. They tore away the clothes of Shahzad and Shama, and paraded them naked around the brick kiln twice before attacking them and beating them to near death. At the time of this happening Shama was 4 months pregnant. After thoroughly beating both they threw Shama and Shahzad one by one in the furnace of the brick kiln. No one heard their cries and appeal of mercy, both burnt alive.

When the family of the victims went to claim the dead bodies, all they found were few bones, there was nothing left from their bodies. The real story behind this dreadful incident was that the owner of brick kiln, Yousaf Gujjar, wanted the couple to return his money which they borrowed during his work, there was a confrontation since majority of brick kiln workers cannot return their loans in cash but do it by working at the Brick kiln. After which he started spreading rumors of desecration of the Holy Quran.

Statement of Yasmeen’s sister of Shama: 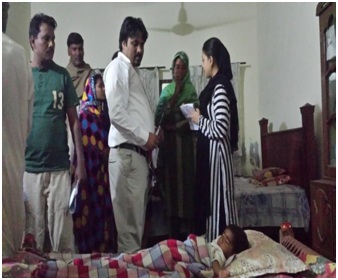 Yasmeen elder sister of Shama informed the team that she also work at Yousaf Gujjar brick kiln and eye witness of this episode. When the angry mob threw Shama and Shahzad in brick kiln furnace she was there and crying for help but no one came to help. She was helpless to safe her beloved sister and brother from the clusters of mob at the moment she just saved Shama’s children from the angry mob as she realized that the mob can harm their children as well. She took them with her and escaped. She explained the team one of the reason that Yousaf Gujjar and Muhammad Ramzan contractor accused Shahzad and Shama for blasphemy because they demanded to increase their wages as the government order otherwise they will leave to another place for work. After conduction with several people in the area and conversation s with the relatives of Shama and Shahzad CLAAS team noticed the negligence of police. The role of police was again not good in this case as we experienced in the several incidents in past. It is total negligence of police since all this went on for quite a while and this place is about 25 minute drive from Lahore; while the local media only shared this news as a Christian couple being burned by an angry mob without sharing the pretext of the misuse of religion to stir up the crowd. As for local Government they only played their role to make sure this story does not reaches the masses and becomes big.

Blasphemy law is totally misused in Pakistan and it is like a hanging sward on the neck of innocent people especially Christians. Till now above 65 people has been killed out of the courts and in the prisons. Few of them were just killed on the spot like Shahzad and Shamaa by the mob without registering any blasphemy case against them. One of the examples we have Salman Taseer who was killed by his own body guard for just helping poor and helpless lady Asia Bibi (blasphemy victim on death row since 2010). We are quite sure that there was not any blasphemy case registered against the couple and it was just rumor which no one tried to investigate the matter or tried to know the truth.