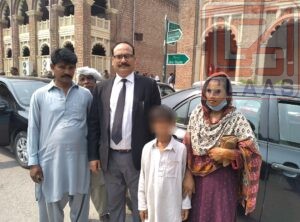 ed free legal aid to the child.  On July 13, 2022, the accused post-arrest bail was fixed for hearing and was heard in the Lahore High Court Lahore. CLAAS lawyer appeared from the victim’s side on behalf of the complainant and argued the case in detail. The court took the matter as a serious issue and called to the Senior Superintendent of Police Lahore in person. Further Lahore High Court observed that the case was not investigated under the Anti-Rape Act 2021. The court also issued notice to the Government of Punjab to explain why the Government did fail to take necessary action for the implementation of said Act and adjourned the case for the next hearing.