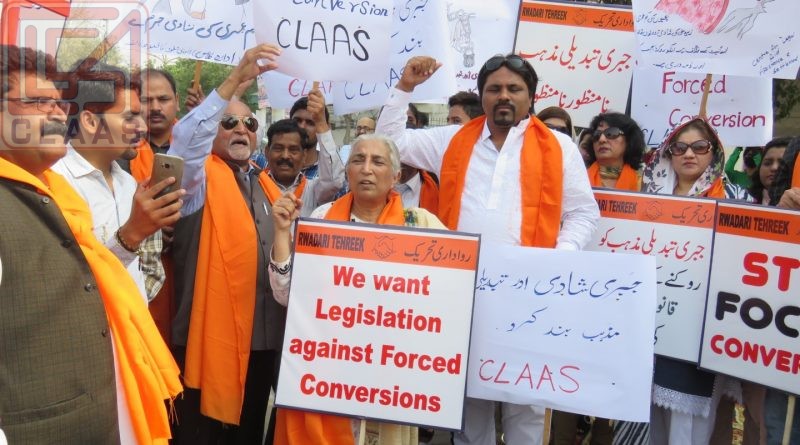 Forced conversion into Islam is a rising problem in Pakistan and numbers of conversion are increasing day by day. On March 29th CLAAS held a press conference on the issues of forced conversion. CLAAS also invited members of Human Rights Commission of Pakistan to join this conference. The purpose of this conference was to raise voice against forced conversion and forced marriages of minor girls of  religious minorities. Mr. Joseph Francis (MBE) National Director of Centre for Legal Aid Assistance and Settlement (CLAAS) being the responsible member of Christian community expressed his deep sorrow on the alarming situation of forced conversion in Pakistan. Mr. Joseph Francis stated that “our young minor Christian and Hindu girls are forcefully converted into Islam and forced to marriage with the Muslim men under the Islamic rites. There is no law against conversion in Pakistan whereas numbers of conversion cases are increasing day by day. The courts always showed their biased attitude if a minor Hindu and Christian girl contracted marriage under the Sharia Law and always kept aside the child marriage restrain act where the age of a girl for marriage is determine as 16. 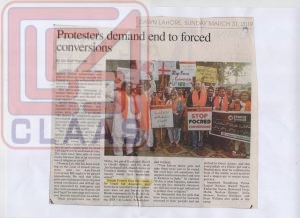 Through this press conference we demanded for the constitution of

As government has failed to protect Christians and other religious minorities in Pakistan due to which many Christian and Hindu families migrated because of their faith as they were not protected by Pakistani government. Under the Constitutional bindings,  policies and practices have been adopted by all government and judicial functionaries to ignore and neglect Christians and other religious minorities all the time at all levels. The situation is getting worst for them. We also demand for taking step regarding criminalizing forced conversions’ bill in all over the Pakistan. If the bill of forced conversion passed would help to stop the persecution of religious minorities as CLAAS has raised this serious issue for last many years and has done number of cases of forced conversion. The efforts are still continuing.