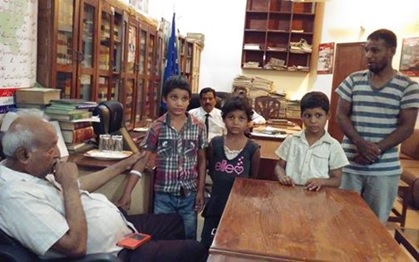 Three minor girls were sexually assaulted by their paternal relatives. Their mother had passed away and father was struggling to provide them basic necessities of life.  He had some disputes with the relatives while trying to get a share from his parents’ properties. In Khuram’s absence his daughters were sexually assaulted by his cousins. To get justice for his daughters he registered an FIR against the rapists in result of that his eldest daughter Suman 12 years old was abducted by the culprits on April 22, 2017.

Khurram Shehzad Victor (35) s/o Morris Abdul Masih is a Christian by faith and resident of Marriam Town, Daska Sialkot. He got married in 2003 with family’s consent to Farzana Sharif and had six daughters who are minors. His parents died some years ago and left properties which were supposed to be divided equally among himself and his other five siblings. But his elder brother and other relatives did not want to give him his share. According to Khurram when his parents died he went to his uncle Iqbal (Morris’s younger brother) to ask for his share but Iqbal along with his wife Seema and five sons mistreated him badly and refused to give any share. Also his elder brother grabbed his mother’s property and refused to give any share to other siblings. Khurram kept struggling for his right and share in property but all in vain. Meanwhile he was living with his family in a rented house and working as a laborer to support his family. His wife, Farzana passed away in 2011 due to heart attack. Later, Khurram started working in a football printing factory to support his children and on the other hand kept visiting his relatives for his share in his father’s property. Days turned into months and they had the same routine until a few months ago when Khurram got to know about a vicious act that his relatives had been doing behind his back. When his daughters returned home from school in the afternoon, Iqbal’s sons along with their cousin (Seema’s nephew) came to visit them regularly and would sexually abuse his three minor daughters. This went on for about a month until on April 18th, 2017 when Khurram returned home from work, his eldest daughter Suman (12) told him about the relatives’ misconduct with them. Flared with anger Khurram left the house along with his daughters and take temporary shelter in the local police station Haji Pura District Sialkot and also filed a complaint against the culprits. A case FIR no. 302/17 offence under section 376 of the Pakistan Penal Code (PPC) was registered and police investigated the matter and got medical examine report of the victim girls. After getting the medical report which confirmed that the minors were sexually assaulted, the police arrested four persons for further interrogation and confined them in the police station. Later on, the opponents being influential tried to pressurize Khurram for reconciliation and withdraw the charges against them but he plainly refused to do so. As a result, to punish him further the culprits abducted his eldest daughter Suman on April 22nd, 2017 she is a victim of rape while he was in the police shelter so that he would withdraw all charges. Khurram again went to the police station to launch another complaint for abduction of his minor daughter but did not get any positive response. His daughter is still in the custody of the abductors and there is no one to help him rescue her. Khurram went to Islamabad and protested in front of the press club still there was no fruitful result. He went from one place to another seeking help but did not get any support from anywhere. Through some sources he came to know about CLAAS and approached the office with his remaining five minor daughters to seek shelter and legal assistance for the recovery of his daughter Suman. 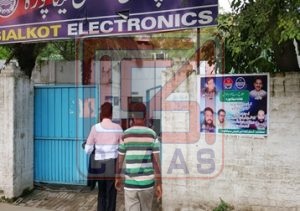 On July 21st, 2017 CLAAS fact finding team went to Haji Pura police station in Sialkot to gather facts about the incident and met with the Investigation Officer (IO) Imdad Shah. According to him, police arrested the accused persons and confined them in the police station after getting the medical reports for sexual assault and registration of FIR against them. The police also provided temporary shelter to Khurram and his daughters in the police station.

Meanwhile his eldest daughter was abducted by the opponents as they were pressurizing him for compromise but he was not ready for that. He tried to file another complaint for his missing daughter but it could not be registered as the concerned police station was Naika Pura instead of Haji Pura. Distressed and heartbroken, Khurram took his remaining minor daughters and moved from Sialkot as he felt that it was not a safe place for them to live and did not pursue the case further. In his absence the opponents got released from the police station under the pressure of the local counselor with a promise that they would present themselves whenever needed by the police for investigation. CLAAS team got copies of the FIR and medical reports from Haji Pura police station and also submitted an application in the Naika Pura police station to register a case for abduction of Khurram’s daughter but it will proceed further after the meeting with the DSP but its lengthy procedure therefore CLAAS decided to file a habeas corpus petition for the recovery of Suman.

On behalf of Khuram CLAAS filed a habeas corpus petition on July 25, 2017 in Lahore High Court Lahore for the recovery of his daughter Suman. The honorable Judge issued the direction to the concerned Station House Officer Naika Pura District Sialkot for the recovery of Suman and produces her before the honorable court on the next date of hearing.