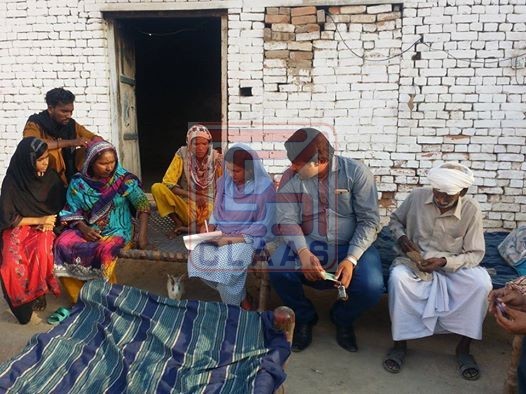 A Christian girl 13, was abducted and forcibly converted into Islam and then married with a Muslim

A Christian girl 13 years, Maria Ashraf was abducted by a Muslim Amjad Ali on April 15, 2017 on Easter night who sexually assaulted her and then converted her into Islam for marriage just to save him from legal litigation. The incident occurred in Gaggo Mandi, a village in Vehari District. After abduction of Maria her family pleaded for the recovery of their daughter but the girl is not recovered yet. After eight days of the abduction on the complaint of her mother Bushra Bibi a case FIR No.255/17, offence under section 365-B (abduction) of the Pakistan Penal Code was registered on April 23, 2017 at local Police Station against the culprits namely Amjad Ali s/o Niaz Ahmed (abductor) and his accomplices Muhammad Imran s/o Sultan, Muhammad Ashfaq s/o Niaz Ahmed and Kaka s/o Muhammad Rafique.

CLAAS team visited the victim’s family on April 24, 2017 at Gaggo 247-EB Vehari District. Maria’s family is only a Christian family who live among the Muslims. Maria’s father Ashraf Masih died six years ago. Maria’s grandfather Shahab Masih, mother Bushra and three siblings were accommodated in a local health dispensary which was not operational. Shahab Masih (grandfather of Maria) is respectable person among the Muslim and he work as a catering assistance in marriage ceremonies of the village.

Bushra 46 years old shared with CLAAS team that she work as housemaid in local Muslim families from day to night to earn for her minors. Her daughter Maria got primary education and started working with Bushra as domestic worker since the past three years. Two months ago Bushra realized that Amjad Ali who lives in front of their house had bad intentions towards her daughter Maria but Bushra did not complain against him with any one. Hence Bushra has fixed Maria’s marriage in other village with Maqsood Masih. On April 15, 2017, on Easter night Bushra went to Maqsood’s house for Easter greetings and stayed there over night. In her absence Maria was abducted by Amjad and his accomplices at night while Maria’s grandfather and her siblings were sleeping. Bushra was informed about the missing news of Maria and next morning Shahab Masih and Bushra pleaded to counsellor of the village Muhammad Tariq for the recovery of their daughter. Muhammad Tariq produced the victim’s family before the local Muslims Council (a committee consisting of local people) and shared the matter before them. The village council inquired about the matter from abductor’s family and Niaz Ahmed (Amjad’s father) assured them that he will hand over the girl as soon as possible therefore the council forbidden the victim’s family to register an FIR against abduction of Maria.

After eight days of the abduction, on April 23, 2017 the abductor Amjad Ali sent certificates of Maria’s conversion to Islam and Muslim marriage documents in the local police station. Thereafter Bushra has taken initiative and registered an FIR against the culprits.

CLAAS team also visited the local police station and met with Assistant Sub Inspector Muhammad Sittar investigation officer of Maria’s case who shared with team that Amjad’s father Niaz Ahmed is confined in the police lockup for interrogation. He further assured that police will recover the girl as soon as possible.

Team also met with the counsellor of village Muhammad Tariq and local Muslim and asked the reason in delaying the FIR against abduction of Maria. According to them they have the set procedure that every issue of villager’s will discuss and settle among local counsel consisting of elderly people.  But if the matter will not resolve in counsel, only then issue would be taken in police or courts for decision. CLAAS team offered Maria’s family for legal assistance and any other assistance if needed.

Finding and Observation of Team