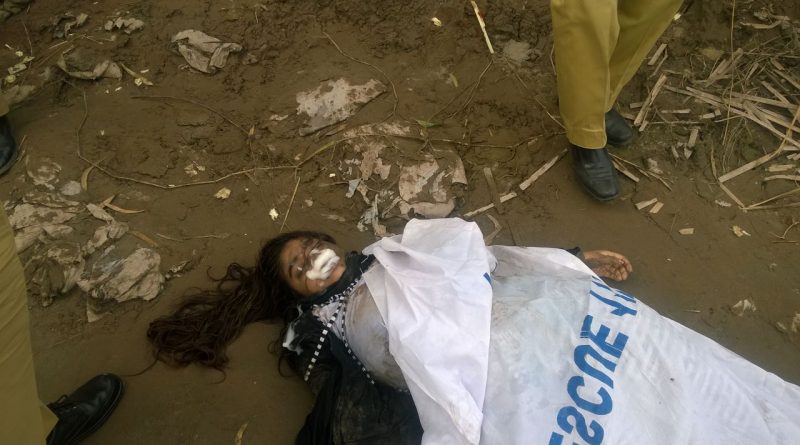 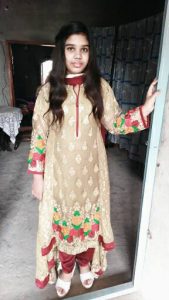 News of rape and brutal murder of a Christian minor girl named Tania Marriam sent a wave of anger and fury around the world.  CLAAS received numerous calls from outside Pakistan inquiring about this incident. On February 8th, 2017 a fact finding team headed by Mr. M. Joseph Francis, Ms. Shagufta Nazir and Mr. Saddique John visited the grieved family in Sialkot. Deceased Tania Marriam daughter of Nadeem Anwar Gill age twelve years was the youngest of four siblings.  The oldest sister Hannia Gill age twenty four years old is married to Akash Gill and settled in Rawalpindi. Harrison Gill age twenty one is also married and works with his father in Dubai as an electrician; his wife is living with her in-laws in Sialkot, Johnson Gill age twenty years old works in a courier company in Sialkot. Their mother passed away in 2011 after which their father Nadeem Shahbaz Gill who work as an electrician in Dubai married their maternal aunt.  Five years ago the family moved to their present rented resident in Chak Mudhir, Sumbaryal, district Sialkot. The family belongs to Catholic denomination and is member of Catholic Church in Kent Sialkot.

Stating the facts Hannia Gill said that her deceased sister Tania completed her primary education from a local institute called Brite School System. Six months ago Tania’s dream came true when she got admission in the sixth grade in the prestigious catholic School “Convent of Jesus and Mary –Sialkot”. 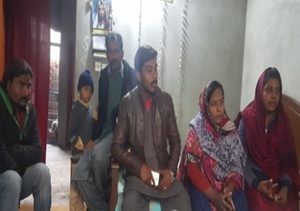 Being the only male at home it was Johnson’s responsibility to pick and drop Tania from her school. On Monday 23rd January 2017; like any other day, Johnson dropped Tania at the entrance gate of her school at 08:12am and watched her sister go in the school. He then went straight to his work. At about 10:45am he received a call from an unknown caller; who was later identified as Tariq. The caller asked Johnson to come to the upper Chenab Canal to identify a dead body of a young girl recovered from the canal, he told Johnson that he found his mobile number from the writing register that was found near the body. According to Johnson, for a second he thought it could be his sister but then immediately dismissed this thought as he saw his sister go safely into the school building.  To confirm his doubt he rushed to Tania’s school.  The school office informed Johnson that Tania was marked absent and did not attended the school that day.  Johnson was still arguing with the school office when at 11:30 am he received a call from Sumbaryal police station to come to the Upper Chenab canal.  Knowing that there was something wrong he rushed to the Upper Chenab Canal. On approaching the site he saw a large number of police force gathered around a dead body; which was covered with a white rescue sheet.  He then reluctantly asked the police to see the body and was shocked to see that it was his baby sister Tania. He immediately noticed that her mouth was full of froth and her face was covered with wet sand. Police took the dead body for medical and autopsy.

Johnson managed to get home and immediately called his father in Dubai. Tania’s dead body was handed over to the family at 1:30am.  The next day 24th January 2017 their father Nadeem Gill arrived from Dubai, the family held the funeral the same day.  Her funeral was conducted by Father Philip John. Tania was laid to rest in peace in Christian graveyard at Chak Mudhir. Her funeral was attended by large majority of Christian and local Muslim community.

Three days after the funeral Nadeem Gill left for Dubai leaving his younger son Johnson Gill to pursue the case.  Police tried to close the case declaring it a suicide. Tania’s family strongly rejected the idea and insisted that their daughter was a happy normal twelve year old with lots of dreams and goals in life she wanted to achieve but her life was cut short by some insane brutal murderer who was still at large.

According to the initial medical report there was no visible mark of violence or injury on Tania’s body which was confirmed by her sister Hannia Gill, who gave bath to the dead body. The final medical autopsy report will confirm the cause of death, this report usually take two to three months to come. Her family shared a very important fact that Tania’s school record show that she was also absent from the school on Friday January 20th, 2017, three days before the incident.  Johnson claim that even on Friday he dropped her at the school main gate and waited till she was in the school building and picked her up after school. Johnson was able to acquire the video footage of Tania entering the school on both days Friday 20th and Monday 23rd in uniform and leaving school after an hour in plain clothes. 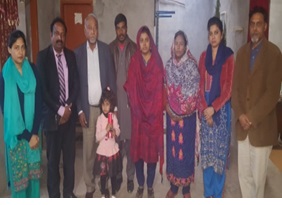 On February 3rd, 2017 Johnson was able to register an FIR No: 42/17 under section 302 of Pakistan Penal Code at Sumberyal police station against unknown individuals. The homicide cell is handling this case. CLAAS team was able to meet with the Investigating Officer Mr. Fayez Khan who informed the team that Tania’s school bag and her uniform was recovered from the school bathroom and was submitted as evidence. He assured the team that his department was committed in providing justice to the grieved family, he further stated that everyone involved in this case were cooperating with the police including the school administration.

Johnson has filed a petition before the magistrate to excavate Tania’s grave to conduct new autopsy in the presence of her family members. This petition is pending before the court.

Before leaving Mr. Francis asked the family not to hesitate to contact CLAAS for any support needed in this case.

After collecting the facts CLAAS team was convinced that this was a brutal and heinous murder of an innocent minor girl who happen to belong to Christian faith but it was not religiously motivated to target this specific community. The area where victim family is residing is heavily populated by Muslim majority who have showed their sympathy and support to the family.