On Thursday May 5th, 2016 at about 11:30 pm Mr. Joseph Francis National Director CLAAS received a call from Chak (village) No. 44, Tehsil Phalyian District Mandi Bahauddin in the Punjab province of Pakistan.  The caller Mr. Adil Yaqoob informed Mr. Francis that the local Muslim community was planning to attack their village with the intention of setting Christian houses and churches on fire. Mr. Francis advised Mr. Yaqoob to also inform the local police about this threat and to keep CLAAS informed of any emergency situation. 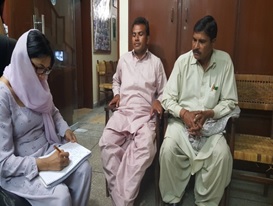 On Sunday May 08, 2016 two residents of Chak 44 Mr. Aamir Yaqoob son of Yaqoob Masih and Mr. Arif Masih son of Atta Masih came to CLAAS office in Lahore and narrated the following facts which led the Christian community living in Chak 44 to abandon their households and flee in search of safety.  They said that they have been sent by their local Catholic priest Fr. Tariq, who knows about CLAAS fearless work for religious minorities.

Almost the entire population of Chak No. 44 is Muslim (2500 to 3000) out of which 10 to 12 % people are Shia Muslims while others are Sunnis. Religious devotion and practice varies from family to family, however religion plays a very important role in the lives of people. There are only 45 Christian families (300 population) settled in that village. Although all the Christian families owns the piece of land they have built their houses on yet they are poor unskilled labors and are very economically deprived. The only church that exists in that village is the Saint Anthony Catholic Church. Politically Muslim League Noon group hold influence in that area.

Imran Masih son of Sharif Masih resident of Chak (village) 44, Tehsil Phalyian, District Mandi Bahauddin, Punjab is a young Christian boy who is employed at a local Health Care Centre as a Janitor.  Rest of his staff belongs to a Muslim faith   On April 16th, 2016, Imran attended a wedding ceremony of his Muslim colleague’s daughter; he recorded a part of wedding ceremony on his cell phone.  On Monday April 19th, 2016 when he went back to work, his colleague asked him to show them the movie clip he recorded; he handed his cell phone to one of his colleague and left to finish his work. When Imran came back he saw that Bilal a local Muslim drug store owner was holding Imran’s phone and was showing the provocative lectures of Pastor Sami Samson to other workers standing around him. When Imran asked Bilal to return his cell phone Bilal hit him on the face and accused Imran of watching anti-Islamic lectures of Christian Pastor on You Tube. Imran swore to Bilal and his angry coworkers that he had never browsed Pastor Sami Samson’s lectures but they refused to let him go. After beating him severely they locked him in an empty room; luckily Imran had another cell phone hidden in his pocket, he used that phone to call members of his Catholic Church Committee and informed them of his confinement in the health center. After receiving Imran’s phone call Aamir Masih and Arif Masih along with few other Committee members went to Imran’s work place to rescue him. At the health center the Committee members met with the senior doctor, they told the doctor that Imran was illiterate and does not have the knowledge to operate search engine on cell phone, they requested the senior doctor to resolve the matter peacefully.  After long persuasion Committee members were able to release Imran.

After his rescue Imran continue to work peacefully in the health center for the next two days. On the third day one of his Muslim coworker Mulvi Manzoor told Imran that the drug store owner Bilal was still upset with him, he urged Imran to apologize and ask for Bilal’s forgiveness. He accompanied Imran to Bilal’s drug store. Not finding him there Mulvi Manzoor called Bilal from his cell phone and put him on speaker. Bilal told Mulvi Manzoor that he was in Sargodha to meet with religious scholars to inform them about Imran and seek their opinion on this matter. He further informed Manzoor that the scholars have issued a fatwa (decree) that Imran has committed a Blasphemy by watching anti-Islamic lecture and was thus entitled to be killed. After this conversation Mulvi Manzoor advised Imran to run away to save his life.

After hearing Bilal on the speaker phone Imran got extremely scared and did not return home that night. The next day Imran’s father Sharif Masih called the health center to inquire about his son. The doctor on duty told him that Imran was not at work. After not receiving satisfactory answer from the doctor Sharif Masih took few Church Committee members and went to Imran’s work place where Mulvi Manzoor informed them about Bilal’s conversation on the phone and told them that Imran has ran away.

While the family was still looking for Imran; his Muslim colleagues spread the news of this incident to other villages and Muslim community. On April 29th, 2016 during the Friday prayer the local Muslim clerics made announcements on the loudspeaker encouraging Muslim community to impose social boycott of Christians living in Chak 44. They forbade Muslims to sell or buy anything from Christians; they accused the Christians of harboring a blasphemer. A local Muslim businessman Irshad Jhakar announced rupees ten lakh ($ 10,000) reward for killing Imran. A local Muslim Masjid (mosque) Committee chaired by Inayat Mahajir, Mistri Bashir and Saddique Arrayian announced to organize an attack to torch Christian houses and worship places. Another Muslim committee member Mohammad Riaz requested the committee to hold the attack till the accusation was confirmed. On Monday May 2nd, 2016 members of the Muslim Committee went to Imran’s work place and asked the senior doctor about the whole incident, the doctor told the Committee members no such incident of Blasphemy took place in his health center. This did not satisfy the committee members and they continue to plan the attack. Every day hateful speeches against Christian community were made on the mosque loudspeaker, instigating faithful Muslims to punish the infidels.

On May 05, 2016 Christian resident of Chak 44 Iqbal Masih approached the Muslim Masjid (mosque) Committee to ask for permission to have his daughter’s wedding ceremony the next day. Members of the committee refused to give permission to Iqbal Masih and forbad him to hold any function in the village.  They told Iqbal Masih that if Imran Masih was not handed to them by midnight they will execute an attack on Christians the next morning.

The next day on May 06, 2016 after Friday prayer Muslim cleric started making announcements asking local and adjoining Muslim villages to gather in Chak 44 Mosque compound (premises).

Seeing a large mob outside the mosque and sensing danger Aamir Masih called 15 police helpline. He informed the dispatcher about the possible attack of Muslim mob on Christian houses in Chak 44. According to Aamir Masih within 20 minutes eight (8) to ten (10) policemen arrived at the scene. They dispersed the crowd and took all the Muslim Masjid (mosque) Committee members to one of the local resident Imran Ghuman’s living room. Ten minutes later Deputy Superintendent of Police arrived with more police squad and recorded statements of the Muslim Committee Members. According to Aamir Masih a local resident Dr. Ashraf Fazi who is a convert (from Islam to Christianity) was standing near the mosque when the mob caught him and started beating him. One of the police officer saw this and dragged Dr. Ashraf Fazi to Imran Ghuman’s living room. Thirty minutes later police left taking Dr. Ashraf Fazi with them. He was later released on Saturday night.

According to Aamir Masih and Arif Masih police never spoke to any of the Christian resident and never returned to patrol at night. They said up to date 75% of Christians have fled from the village; whoever remain are fearful for their lives also they have no food to eat as the local Muslims refuse to sell them anything. They requested if CLAAS could arrange food for the remaining families. Aamir said that Present Federal Minister Kamaran Michael also called the local police station to inquire about the situation.

After talking to Aamir and Arif Mr. Joseph Francis called the Federal Minister Kamran Michael and requested him to have police patrol at night in the village till the atmosphere come back to normal. Mr. Francis has decided not to visit the village at present as it will draw unnecessary attention. Meanwhile CLAAS is in close contact with the local residents and when needed will intervene accordingly.