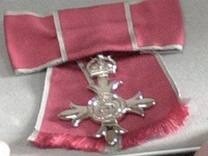 “Honorary Award of MOST EXCELLENT ORDER OF THE BRITISH EMPIRE (MBE)

Her Majesty Queen Elizabeth the Second, of the

On November 03, 2011 (Thursday) His Excellency Mr. Adam Thomson (The British High Commissioner for Pakistan) in a ceremony held in the British High Commission Islamabad present the Most Excellent Order of the British Empire (MBE) Honorary Award medal along with a certificate on behalf of Her Majesty Queen Elizabeth the Second to Mr. M.A Joseph Francis. The CLAAS staff and number of friends of CLAAS and family members attend the reception party.

His Excellency Mr. Adam Thomson (The British High Commissioner for Pakistan)
addressed the ceremony and lauding the services of Mr. Francis and also conveyed
the greetings from the Queen Elizabeth the Second and from her Husband Sovereign Grand Master Prince Philip, Duke of Edinburgh. Mr. Thomson recognizes the outstanding services of Mr. Joseph Francis for long life services for human wellbeing. Mr. Thomson further said that Mr. Francis has worked all his life as human rights activist and founded CLAAS and presently is serving as director of the Centre for Legal Aid Assistance & Settlement (CLAAS). He additionally said Mr. Joseph Francis rendered his services in providing legal assistance to the Britons of Pakistani origin and on resolving the issues of forced marriages. 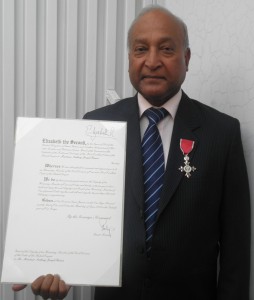 Mr. Joseph Francis thanked Her Majesty Queen Elizabeth the Second for the dignity and rank of honorary member as well as nominated him for the Most Excellent Order of the British Empire (MBE) award. Mr. Francis dedicated the Most Excellent Order of the British Empire award for Pakistan. He further stated that he will continue his efforts for the protection and promotion of human rights and this award will give him courage for work hard. Mr. Francis took pride to receive this award as being a Pakistani and he anticipated that this honor will bring up the name of the country as peaceful and humanitarian Pakistan in the world. Mr. Francis also thanked and acknowledge all efforts and hardworking of his staff for helping and assisting him professionally. Mr. Francis recalled and said this honor was not possible without the commitment and activism of CLAAS staff especially helping him in the struggle to protect, defends and promotion of human rights. Mr. Francis thanked the distinguish guests for attending the award ceremony and shared with them that CLAAS is a multi religious organization and helping the victims of violence without cast and creed.

Rt. Rev. Samuel Robert Azraiah, Bishop of Raiwind Diocese Church of Pakistan, Founder member and Vice Chairman of CLAAS Board also attend the ceremony and expressed his excitement and thanked to Her Majesty the Queen for this honor. Bishop Samuel shared that he together with Mr. Francis started CLAAS and he is witnessed that how Mr. Francis without any fear rescue every victim of religious intolerance and intimidation. The violent circumstances against non-Muslim citizens of the country stimulated an initiative of motivation of help the persecuted Christians for Mr. Francis to rescue of every victim of religious intolerance and oppression. He further said they are proud for this privilege and this award is an honor for Pakistan.

The CLAAS staff admired the honor for Mr. Francis by the Queen Elizabeth the Second and was pleased for this honor and in this connection they had high regard. The CLAAS staff pledged that their best wishes and comradeship will always remain with Mr. Francis and will continue their struggle for the elimination of all forms of discrimination against the members of the religious minorities in Pakistan. During the formal procedure of award giving the distinguish guests were served with ceremonious high tea. In this great evening number of high officials from the British High Commission Islamabad was also present.