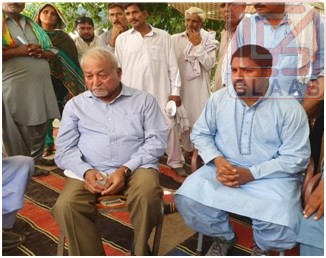 On August 16, Chaudhary Asghar Fazal, a well-known Christian activist, was murdered by Aziz Ul Rehman and Muhammad Iqbal, two Muslims, in Village Easa Pur Chack No. 31–10R, located in the Khanewal district of Pakistan’s Punjab province. Mr.  Fazal was targeted because of his support for the Christian community. It is a great loss of the local community who always supported by him. The local media highlighted the brutal murder of late Ch. Asgher Fazal and his family is waiting for justice.

Mr. Asghar Fazal leading the Christian community in Khanewal and he was head of a Christian village (31-10R) was killed by two local Muslims namely Aziz Ul Rehman and Iqbal alias Balla near a village while he was on the way to his home on 16th of August 2019. He was a human right activist and an active worker of CLAAS.  On   19th of August 2019 CLAAS team along with Mr. Joseph Francis went to District Khanewal to attend the funeral of Mr. Asghar Fazal and for condolences with the distressed family. 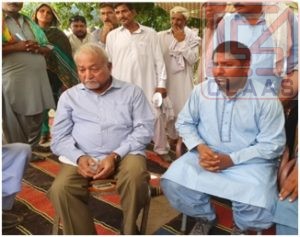 Back ground of Mr. Asghar Fazal

Mr. Asghar Fazal (late) was 62 years old and residing at Chak No. 31–10R Khanewal. He was retired Vice Principal of a Christian Educational Institution named St. Joseph High School Khanewal. Being a Human Right Activist he does a lot of work for welfare of Christian Community and for the betterment youth.

Mr. Fazal worked tirelessly to support the Christians who were facing troubles in their routine life and he always tried to resolves their matter through his reliable sources.  He referred many cases to CLAAS for legal assistance belongs to Khanewal area and in these cases he was actively involved during court hearing and updated to CLAAS accordingly.

Facts behind the murder

According to the fact Mr. Fazal was killed because of his active role in a murder case registered against five local Christians in 2013 in which they were accused of murdering of a Muslim Yousaf Khan.  CLAAS had a fact finding on this incident with (late) Mr. Fazal. CLAAS was providing free legal aid to these five Christian who were allegedly involved in this murder. Four were released on the bail in the same year i.e. 2013 and one was behind the bar who subsequently bailed out from Lahore High Court Multan Bench. All five Christians faced trial in the Sessions Court Khanewal and finally all were declared innocent and acquitted on June 29, 2019 from all the murder charges. The opponent Muslim party attacked on the acquitted persons after the hearing of finial decision but by the grace of God they acquitted person were safe and the Muslims attacker were arrested. Somehow the police released them after few days’ confinement in the police station.

As the Muslim opponent kept grudge against the acquittal of Christians and they were not happy with the court decision. These Muslim since 2013 also kept grudge in their hearts for Mr. Ashgar Fazal as he is supporting Christian community of village 31-10R District Khanewal.  According to CLAAS fact finding report that on April 26th 2013 Yousaf Khan along with his brother Aziz Ul Rehaman and companions attacked on Christian village Easa Pur 31-10R and opened fire on Christians as they wanted to grab the Christian land (4 Acre land of a Christian Asher) and tried to occupy the village. As Christian were very well know that Madaad Khan and his sons have criminal records and further known as land grabbers and blackmailers and by cast they are Phatan and treated Christian’s as slaves. Therefore when they attacked on the village then the local Christians stood against them and also opened fire in their defense which was a normal act during the fight Yousaf Khan injured and died on the spot with the firing of his companions(Deceased Yousaf Khan has criminal record as he killed an old man of his locality in 2010). On the complaint of Madaad Khan (Yousaf’s father) the local police registered a murder case at Police Station Khacha Kho District Khanewal according the FIR No. 127/13, offence under section 302/324/148/149 of the Pakistan Penal Code and allegedly involved five Christians in the murder of Yousaf Khan. The local police investigated the matter and also got postmortem report of Yousaf Khan. According to that, it was not established that Yousaf Khan died with the firing of Christians.  Mr. Asghar Fazal (late) was Numberdar (head of the village local council) at that time and he along with some other locals contacted CLAAS and requested for legal assistance in this case. As head of the village late Fazal had played very important role and he always supported to those who were arrested. With the legal support of CLAAS the Christian were acquitted on June 29, 2019 and it was the defeat of Muslim and they were not happy from the court decision.

The Muslim knows very well that they did not defeat to the Christians in the presence of their strong and brave leader Mr. Fazal so they decided to teach a lesson to Christians and after two months of court decision they killed their leader for supporting and advocating them.

Statement of Asif Ashgar and Registration of FIR 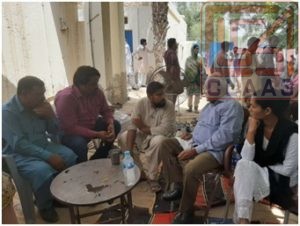 “ On the day of incident August 16th 2019 my father Asghar Fazal went to Chak No 31-10R on his car for visiting his agriculture land and on the way back to home Khanewal he was murdered” Asif Asghar (deceased’s son) told CLAAS.  He added that “my father was followed by the two Muslim opponent namely Iqbal alias Balla and Aziz ul Rehman at about 1: 45 PM who were on their motorbike and they overtake the car and opened the fire on my father’s head. My father died on the spot.” The killer escaped away and the local people informed to the local police and police reached on the spot. He further added that police took his father’s dead body for postmortem at Multan/ District Hospital Khanewal. On the same day on the complaint of Asif police registered a murder case against Aziz ul Rehman and Iqbal alias Balla according the FIR No. 402/19 offence under Section 302/ 34 of the Pakistan Penal Code at Sadar Khanewal Police Station. On August 18th 2019 after all necessary investigation my father’s dead body was handed over to us for funeral. Further after his father’s death the local Christian community selected Asif Asghar as the head of their village.

The police registered the case against the accused Iqbal alias Balla and Aziz ul Rehman on the compliant of Asif Asghar (deceased’s son). The killer escaped on the spot but later on surrendered. Police has sent them in the judicial lockup at Multan Jail.  Meanwhile an underage (that is not sure but seems like that) boy named Shahid Khan (aged about 16) claimed that his father Aziz Ul Rehman and his companion Iqbal alias Balla are innocent and he (Shahid Khan) is murderer. Police changed the direction of their investigation and completed the challan file against Shahid Khan. 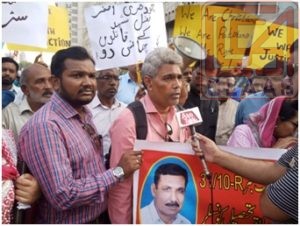 There is an apprehension that the main culprits were released by the police in their investigation therefore the complaint party (Asif Asghar and his family) approached local DSP and DPO for fair investigation as it is not a simple murder of an activist but it is a matter of community/ religious minority but police and concerned authorities failed to protect the entire community of village 31-10R. Because the Muslim opponent created problems by different means and harassed them while pursuing the case investigation as still matter is pending for trial. On September 28th 2019 opponents had firing in the village. It was done right next to Asif Asghar’s land, shortly (5-7min) after the bus of Christians was left for a prayer meeting in Shanti Nagar. Police was called; they came and collected bullet shells.

On 1st October, Joshua Asghar had a conversation with SHO Kacha Kho and he assured for the registration of FIR. DPO and DSP were also well informed about this incident.

Further another incident took place where a Christian man Naseer Bashir was tortured for his support to Asif Asghar and his family. His FIR was registered on October 10, 2019 but later on pressure was built on him and he decided to withdraw of his complaint after compromised with the opponents just for the sake of his life

After these incidents mentioned above complaint Asif Asghar and his family through their legal counsel (Mr. James Joseph Advocate High Court) submitted an application before the concerned authorities for change of investigation as the aggrieved family is not satisfied from the Investigation Officer who investigated the matter initially. Further the he local Christian community also protested against the concerned DSP and DPO but all in vain and still the application is pending.

CLAAS is in contact with the aggrieved family of Mr. Fazal (late) and found that the family is not secure in Pakistan as the opponent are behind them and tried to withdrawal of murder case registered against them therefore the put their all efforts to build pressure against Asif Asghar and who is fallowing his father’s murder case whereas it was observed by CLAAS that Joshua Asghar who is living abroad and came to Pakistan to attend his father’s funeral was also not saved therefore after the funeral he went back and now did not came to Pakistan due to security. At present Asif Asghar who is married and living along with his wife and child, his brother Faisal Asghar who is single and their mother who is widow of Asghar Fazal are very scared due to their opponents.

CLAAS is in contact with the aggrieved family and is supporting them morally and financially by paying the legal charges of Mr. James Joseph Advocate High Court who is appointed for court proceeding and CLAAS paid him Rs. 3, 00000/- PKR against his services and the rest of amount paid by Asif’ family.