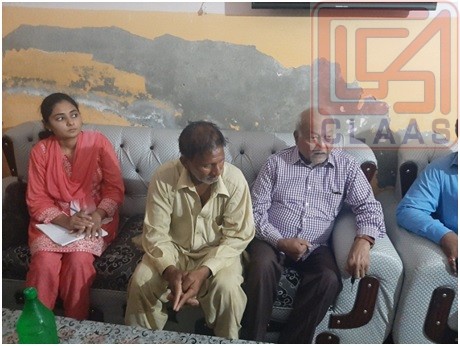 During the conversation Riaz Masih shared that on August 21, 2019 in the morning a dispute arose between Amjad and Adeel (18) s/o Javed (deceased) due to minor issue and they both used filthy language against each other.  Riaz complained to Amjad’s father and asked him to advise his son to stay away from Riaz’s family. Amjad kept grudge in his heart and on the same evening at about 6: 00PM Amjad along with his brother Naveed and father Abdul Majeed attacked on Javed Masih in front of their house in the street and killed him with his knife. Riaz further shared that while they were beating Javed Masih, his son Suleman (Javed’s younger brother) went out from the house and he tried to rescue him but all in vain. Javed Masih died on the spot and Suleman got severe injured. Javed’s elder son Adeel also got injured by the attackers.  Many local people gather at the place of occurrence but no one tried to protect Javed and his brother as they were frightened. 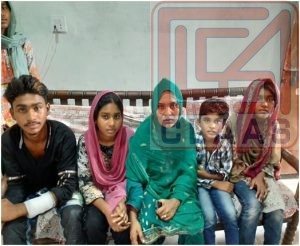 Riaz’ son Naveed called to the local police and informed them about the incident. Naveed also immediately took all injured person to hospital to recuse them. After half an hour police reached at the spot and investigated the matter from the local people who were gathered there and the accused Abdul Majeed and his son Naveed Abdul were also present there. Police arrested them from the spot whereas Amjad (murderer) escaped away and later on same night he was arrested. As Javed died on the spot and Suleman could not survive with his injuries and died in the hospital. Police registered a case FIR no.1149/ 19, offence under section 302/324/34 of the Pakistan Penal at Sattokalta District Lahore on the complaint of Naveed s/o Riaz. The accused were confined in the police station after the registration of FIR and later on sent into judicial lockup.

Riaz further shared that Amjad dislike Riaz’s family and he was jealous from them as they have a house property and a vehicle. Amjad is a drug addicted and he always tried to create problems from them but they ignored him. Further both deceased were married and they left two widows and four children behind.  Javed has four children and his wife Bushra Bibi is a domestic worker whereas Suleman got married in January 2019 and his wife is expecting with child.

CLAAS had collected facts of this incident from the locals and after that had a meeting with the concerned police officials of Sattokalta police station who are investigating the matter.  The concerned Investigation Officer (IO) shared that police recovered the crime weapon from the accused and got their physical remand from Magistrate Court Lahore. After remand police send to the accused in judicial lockup.  CLAAS is providing free legal assistance to this aggrieved family and appointed its legal adviser Mr. Tahir Bashir and Nasir Anjum Advocates for court proceedings. CLAAS will produce to the eye witnesses for recording their statement before the Judicial Magistrate.