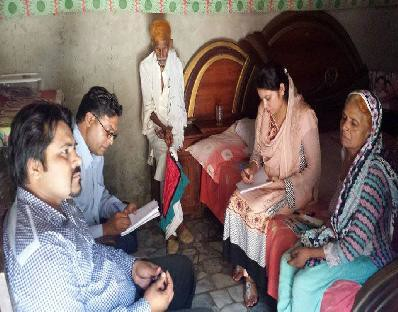 Ms. Fouzia Sadiq 26, a Christian married mother of three forcibly remarried with Muhammad Nazir Ahmad 56 years old a Muslim on July 23, 2015 at Burj Mahalum Chak 35 – Pattoki, District Kasur,. Fouzia worked as maid along her mother at Nazir house who shared that Fouzia is converted to Islam and married with him. Nazir  is father of eight children who are married and have grandchildren as well. On August 3, 2015 Mr. M.A. Joseph Francis, MBE, National Director CLAAS, came across this incident. The CLAAS team visited the place of occurrence on August 4, 2015 including Mr. Sohai Habel, Finance Manager, Mr. Saddique John, Field Officer and Ms. Shagufta Nazir, Assistance In-charge Legal Department to collect the real facts.

On July 30, 2015 Paris brother registered an FIR no. 518/15 under section 496-A PPC at the City Police Station nominating Nazir Ahmed, Sajid s/o Nazir Ahmed and Uzma w/o Sajid. In result Nazir presented Fouzia in court for statement in which she shared that she is converted and remarried with her own free will. On the basis of her statement Nazir gained pre-bailed by the court despite existing legal precedents from Lahore High Court  which clearly state a ‘married Christian women cannot be remarried to a Muslim till 90 days even if converted’ under PLD-2005 Lahore 126.

Victim’s mother Bashiran w/o Sadiq Masih told that she worked as housemaid at Muhammad Nazir Ahmed s/o Muhammad Nawab’s house for the past twenty years, as her husband’s arm is paralyzed. She has six daughters Nasreen, Fouzia, Sumaira, Sofia, Sonia, Iqra and only son Paras. Fouzia was married to Sabir Masih a resident of Kingrey Karyal at Raiwind in April 1997. The couple had three children Muqadas 11, Sania 9 and Sahil 5. She developed minor dispute with her husband and came back to her parents five months earlier. She started working with her mother as housemaid in the same house. 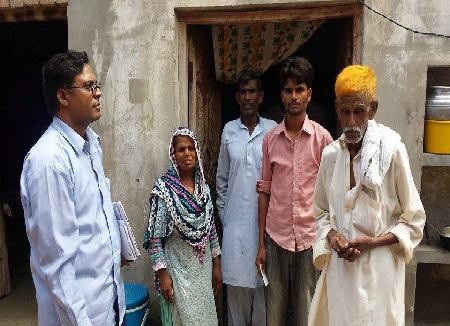 Sadiq Masih told that Fouzia was regular at work and return with her mother or brother. On the day of incident her brother Paras reached the workplace to bring Fouzia back home. Upon inquiring from Nazir, he was told she is not at home and has gone to markat with Uzma, his daughter in-law. In the evening, Paras went again with his mother and got the same answer. Next morning, Sadiq, Bashiran and Paras went to bring her back when Nazir informed that he married Fouzia under Islamic rites after conversion.

He is a founder of Christian Youth Organization and a spoke person from the community. He said that Nazir Ahmed is an influenced person supported by the local authorities. He further said situation is not clear as Fouzia is captured in the confined of Nazir, therefore she will give statement on her free will.

Upon inquiring from the concern ASI Muhammad Sarwar, The CLAAS Team was told that the FIR has been discarded upon learning that Fouzia has converted and married to Nazir Ahmed who have presented pre-bail, marriage certificate and conversion certificate along with her statement of the court on her free will.

Burj Mahalum is situated at the outer lane of the city of Pattoki in a radius of four kilometers. This place has 60-70 Christian families living among Muslims as majority.   All most all the Christian families are illiterate and work as laborer to the Muslim community or daily wagers. There is no church at the village.